Home / Collecting / How Old is My Can?

How Old is My Can?

I get a lot of emails asking "how old is this can?" So, I've put together some guidelines. I'll start off with some general hints and rules and then we'll get to specifics. There are often exceptions to these rules so I'll try to include them when I can.

Date Stamps: First off, if you have a Ballantine or any one of a number of cans from the Pacific Coast states there may be a date stamped on your can on the top or bottom! This will indicate either the date the can was filled, or the date the beer was brewed before, so you have a good idea of about when your can was produced and sold.

A lot of states also required a tax stamp on the can, which usually appeared on the lid if it is a flat top, on the cap if it is a cone top, and on the bottom for a pull tab. Unfortunately I do not have the data needed to date a can by its state tax stamp.

Brewery Dates: Find when the brewery that filled the can was in business. Often a Google search will find this info. For example, if you search for Christian Heurich, which made Senate Beer among other brands, you will find it closed in early 1956. So Senate cans were filled before 1956. This is not a fool-proof method, however. Sometime when a brewery closed another brewery would purchase its brand names and the new owner continued to use the old brewery name. For example, Baltimore's Gunther Brewery was purchased by Hamms in 1959. After a couple of unsuccessful years trying to sell Hamms beer to old Gunther customers, Hamms reissued Gunther Beer and the new cans read "Gunther Brewing." Still, finding out when the brewery was in business, along with the other information on this page, will help you find a date for your can.

Flat or Cone Top?: Next: you'll need to know if the can has a cone or spout on the top. If so click here to start. If is a flat top or a pull tab, start here.

Other types of cans include.

Is your can a pull tab? Yes: The earliest pull tab (an Iron City) was sold in 1962. Schlitz started using them in 1963 and other brewers quickly followed. By 1967 few brewers still used flat top cans that had to be opened with a church key. There are some exceptions from the 1970s and 1980s, but for MOST cans, if it's a flat top, it dates from before 1967.

Does it open with two small buttons you push in? Then it dates from the mid 1970s until the early 1980s.

Does it open with a StaTab? These came into use in the mid 1970s.

Is the can crimped where the body meets the lid and bottom? If so, then it dates after the mid 1970s.

Is your can a flat top? Yes. By 1967 few brewers still used flat top cans that had to be opened with a church key. There are some exceptions from the 1970s and 1980s but for MOST cans, if it's a flat top, it dates from before 1967. The exceptions are some cans made for states like Oregon that banned the pull tab due to litter in the late 1970s, and some cans were made as flat tops to sell to collectors in the late 1970s and early 1980s.

This is just one example of an Opening Instruction panel.

Aluminum Top: Does it have an aluminum top that advertises itself as a "Soft-top" or words to that effect? Then it dates between 1960-1964.

A soft top can.

Aluminum Cans: Is it aluminum? Aluminum cans came into wide use in the 1970s but the first ones were being sold by Primo and Coors in 1958-1959. (Coors were 7 oz cans). A few other brewers including National, Hamms, and Budweiser started using them in the early to mid 1960s.

Patent Numbers: For cans made by American Can you'll find the following patent information.

Other odd sizes started to meet local tax laws on alcohol. 10 and 11 oz cans were produced starting in the 1950s and 14 oz cans began to be produced in the early 1960s.

Cone tops came into use in 1935 and the last one was used by Rice Lake Brewing in 1960. The exceptions are fake beer cans made for collectors during the 1970s. General Pulaski and Milwaukee Premium are the most common of these FAKES. 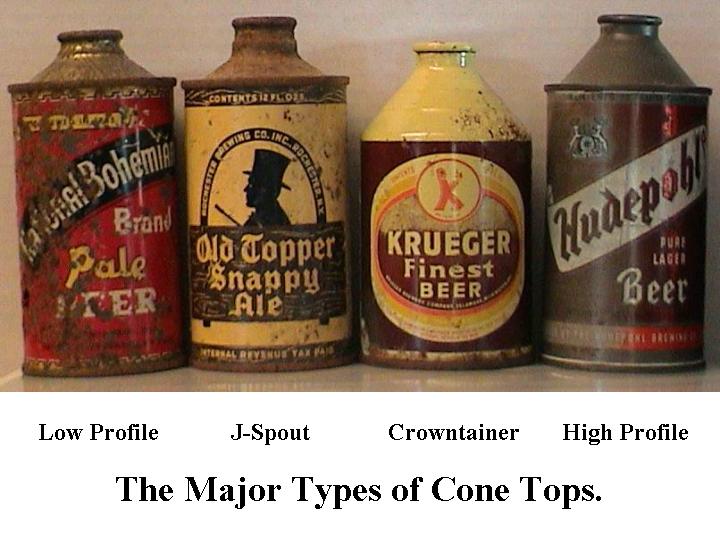 Low Profile cones were generally used before World War II, high profiles were used after. There are exceptions for some West Coast cans where low profile tops were used in the late 1940s.

The original low profile cans had flat bottoms and inverted ribs on the top. These were used in 1935 and 1936 and were replaced by cans with a concave bottom and ribs that stuck out along the top in early 1937.

J-Spouts were used between 1937-1941. They were replaced by Crowntainers. Only the very earliest ones had flat bottoms.

Crowntainers were used between 1940 and about 1953-54. Look at the side of the can. There should be a small box with patent information. If it says "CROWNTAINER "REG'D U.S. PAT. OF." then it dates before 1945. If it has the actual patent numbers listed, then it dates post 1945. Check the wonderful Crowntainer Central page for detailed info on dating crowntainers by such details as paint types.

High Profile conetops came into common use right before World War II and were used until 1960. They all should have concave bottoms. There is one exception. One company, American Can, made high profile cones with flat bottoms in the 1940s. There were used by only a handful of breweries, Esslinger, Schmidt's, Gunther, and American in Rochester, NY. WARNING: A lot of fake conetops have flat bottoms and high profile spouts.

Other odd sizes started to meet local tax laws on alcohol. 10 and 11 oz cans were produced starting in the 1950s and 14 oz cans began to be produced in the early 1960s.

An odd sized can is not necessarily rarer than a 12 oz. It depends on the individual can, some are very common and some are rare.

Quart cans came into use in 1937. A few quarts made in the late 1930s were flat top quarts that required a church key to punch two holes in the top. These were used by a small number of breweries including Croft, Liebman (Rheingold & Liebmann brands) and Adam Scheidt (Valley Forge brand). They are all fairly rare and very valuable in good condition. Ballantine also used a quart flat top in the 1950s that used a church key to open. They are not rare.

A flat top quart and a cone top quart.

In the 1950s Pabst and a handful of California breweries made quart cans with a very, very low spout that was capped with a very thin bottle cap. 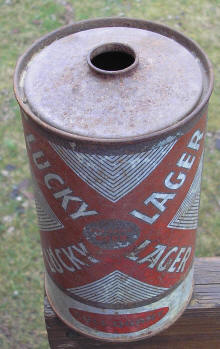 All other quarts should have a cone top. They went out of use by the late 1950s. They range from the very common to the very rare depending on brand and variation.

For more on quart cans see the One Full Quart site.

Gallon cans and Tapa-kegs came into use in the mid 1960s.